Incremental games come in all shapes and sizes, and weird and wonderful premises. There are clickers in which you become a successful novelist, battle through roguelike dungeons, mine for meme-themed currency, and so on. Despite the genre’s simple mechanics, some developers come up with some surprisingly imaginative ideas. With Alter Ego, Japanese studio Caramel Column has produced an incremental game all about self-discovery. Here are three reasons you should wander down its corridors of self-reflection…

Alter Ego is a bit like a dream. You drift through shadowy corridors, tapping on pensive thought bubbles to accumulate ‘ego’ currency. Everything is black and white, save for the occasional blue butterfly fluttering by. In book-filled rooms, a mysterious, expressionless girl called Es guides you through multiple-choice questions designed to reveal something of your inner self — and discovers something of herself in the process. Not exactly a rehash of Cookie Clicker, then. The Alter Ego experience is underpinned by a mood-setting piano and vocal score, while the graphics and dialogue draw heavily from Japan’s popular Visual Novels. It all adds up to something quite unique, and surprisingly emotive; a clicker with a ticker.

To find out about yourself

Alter Ego has more depth than you’d expect, promising to reveal something of your own psychological tendencies. Much of the in-game psycho-analysis draws from Freud’s controversial theories of the Id, Ego and Super-ego. The multiple-choice questions centre on personality traits; are you easily influenced by others? Do difficult situations make you work harder? Do you get jealous easily? There are also association games, as well as hypothetical scenarios requiring you to choose from possible outcomes. Each round of questions ends with a little analysis, pointing out a trait in your personality. 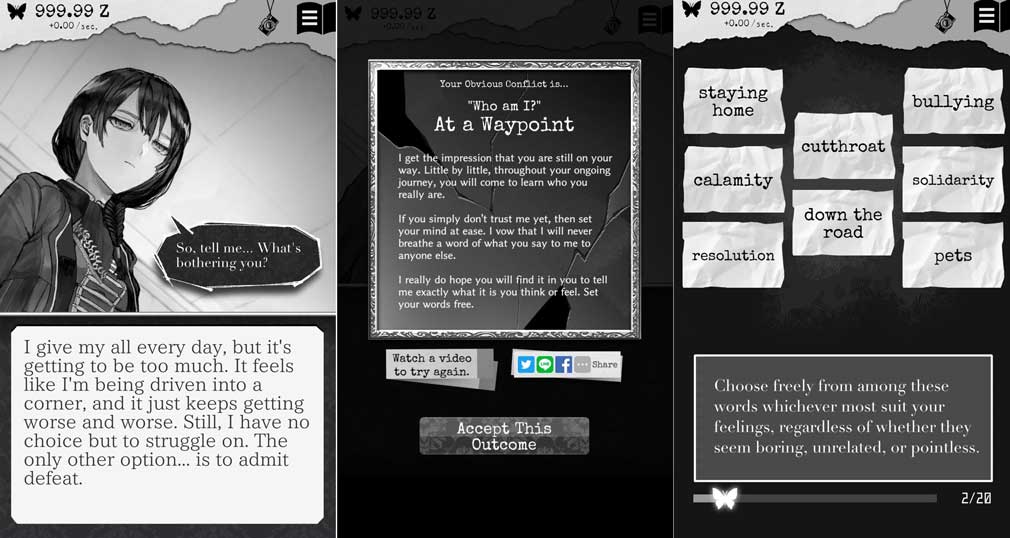 For the replay value

Many clickers are designed to be endless. Alter Ego, on the other hand, has a definitive ending — three of them, in fact. You’ll go through several cycles of tapping thought bubbles, completing tasks and working through sessions with Es until you complete the game. How you respond to the quizzes and dialogue trees put to you will determine which of the distinct endings you attain. After an ‘honest’ play-through, why not see what sort of ending different answers would have given you?

Alter Ego was well-received in its homeland of Japan, receiving a 4.9/5 rating on the App Store, 500,000 installations and plenty of fan art. The recent English-language version has been met with similar praise. See what the fuss is all about and discover a little something about yourself by picking up this contemplative clicker. You can download Alter Ego for free on iOS and Android now.