Book of Demons is a procedurally generated dungeon crawler, in the Diablo mould. Campbell Bird absolutely loved the game when he reviewed it for our sister site 148 Apps. So we got our App Army to play the game and see if they agreed.

Here’s what they said:

Not to beat around the bush but Book of Demons is a Diablo clone. Cursed town, town folk that help you out, dungeons to crawl for loot it’s all here and so familiar. The conceit is that you are playing a book so all the characters and monsters look like they belong in a pop-up book.

Unlike Diablo, your character’s movement is limited to a fixed track in the dungeon and your manoeuvrability is limited. Combat is simple, consisting of touching a monster when it becomes visible. It can get confusing when there are a lot of monsters on screen as you frantically tap on your enemies,

Graphically and aurally this game is a class act. Although extended play will reveal the dungeons all look the same for many levels. I found it very addictive and will be playing this one for a long time.

Diablo clone built for the mobile platform. Great looking cardboard cut out presentations, good voice acting but the story just meh (been there done that). The gameplay was built for a mobile platform, tap to attack and touch to move but sometimes, when the action ramps up, you end up moving into your opponents when instead you want to attack them and really that’s the only minor frustration I have.

It’s a great game that ramps up the difficulty as you go and I definitely want to see this one to completion. If you die you leave all your belongings behind in order to go back and pick up later and you unlock different styles of warriors to play as later in the game as well. A great game that’s really fun to play yet challenging with 3 different levels of challenge to start: casual, normal – where I started – and expert.

You start off going through a short intro then into creating your character, choose a class to start with – you have to unlock the others. You then get to pick the difficulty of the game from casual, normal or roguelike. The graphics are excellent and the game runs smoothly and I encountered no issues at all.

I have to admit I’m a novice at this type of game so took my time reading through the tutorials which weren’t long-winded. The game I found to be very engrossing and before I know it an hour or so had passed. I would recommend the game I enjoyed it and had fun with it, even though I’m no expert at these but found it enjoyable even when I was getting killed. There is always something to do and so much to complete.

Book of Demons is a Diablo clone with an isometric view and fast-paced gameplay, but it has some unique twists on the formula as well. Visually it has a very interesting cardboard-like design, which gave me a pop-up book feeling. To my surprise, the dialogues of the townsfolk are also voice acted but they explain some mechanics and help in world-building rather than expanding the barely existent story.

The game offers you 3 game modes to choose from, ranging from casual to almost permadeath rogue-like and each of these can be played in SUPERHOT mode. This setting comes in handy because the combat system and the controls are far from enjoyable: due to the player’s limited movement capabilities and uncomfortable gesture recognition you will often run into enemies rather than attacking and would start attacking into the direction of the other finger rather than activating the card you tried to activate.

Sadly they didn’t utilize the potential in the card system, instead the developers decided to dress up the regular skills, consumables and passives as cards which work very similarly to any other hack ’n’ slash RPG’s with the exception here you drop them if you die, so you have to get back to your grave to return them to your inventory.

This was a game that was very repetitive and yet I enjoyed it. The gameplay was simple, the sound suited the game and the graphics were dark in keeping with the dungeon theme. (Although there are monsters to be fought don’t expect to be frightened by them.)

Cards are collected to help battle through the game, there are coins to collect and to be fair the levels did get harder but not enough to really stop progress.

I don’t normally play card games but this one was easy to follow and although I wouldn’t have bought the game if I’d seen it advertised, I’m glad that I got to play it, as it was well worth the time invested in it.

Book of Demons is heavily inspired by Diablo. It’s an action RPG that’s on set paths. The flexiscope feature is a fantastic addition to the action RPG genre. It lets you choose the length of your game session so that you can start and finish an entire dungeon run during that time. I also want to comment on the graphics. The presentation of the game is great and looks like something out of a book. The graphics are heavily inspired by papercraft and fit the game perfectly.

The actual gameplay has some issues though. The hitboxes on the monsters and items felt way too small. During battles, I would find my character walking around instead of attacking the enemy that I was trying to press and hold on. I think the game would be much smoother and more fun with either larger hitboxes on points of interest or giving attacking a higher priority than movement if you try to push and hold during combat.

Overall I enjoyed the game even though I had some frustrations with the controls. 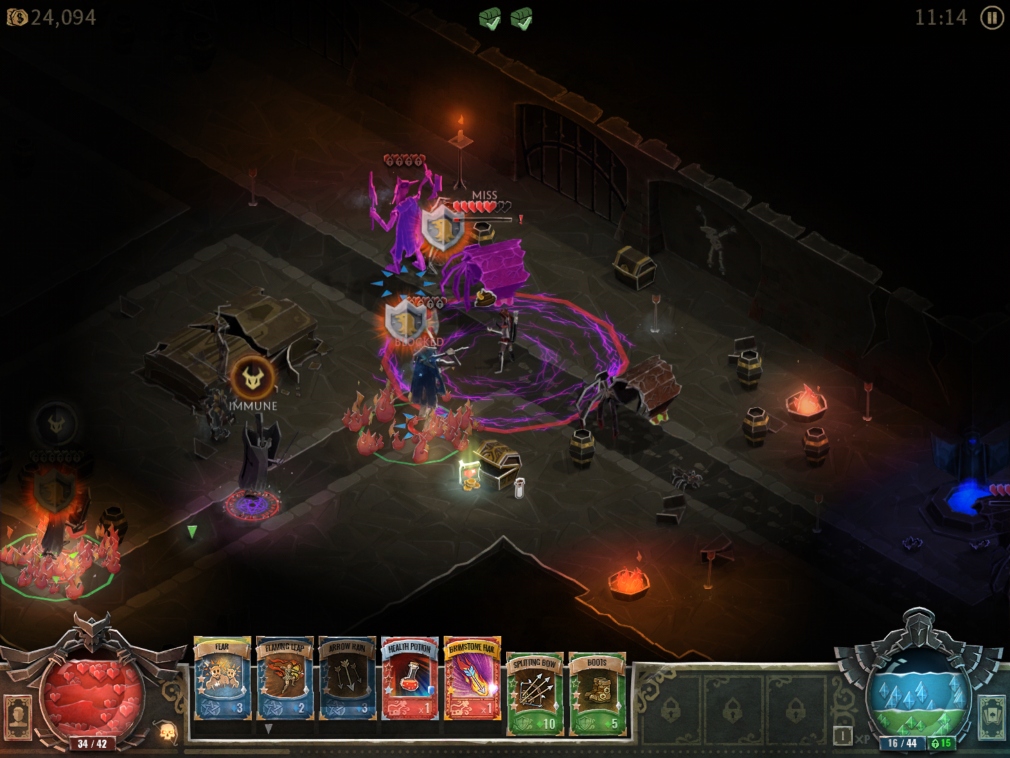 The App Army is Pocket Gamer’s lovely community of mobile game experts. As often as possible, we ask them for their thoughts on the latest games and share them with you.
To join, simply head over to the Facebook Group and request access by answering the three questions. We’ll get you in right away.