Dead Cells has made its way onto Apple devices after receiving an abundance of praise on other platforms. But how does it fair on mobile with touch controls?

We asked the App Army to find out. Here’s what they had to say.

I’ve been anticipating Dead Cells since its first announcement and never lost any interest even after its delayed launch on the App Store. I won’t lie if I say that this game exceeded all my boldest expectations tenfold. Most importantly, it performs flawlessly on my rather old device, which speaks volumes about the amount of hard work that was invested in this project.

The only small gripe that I have is relatively low-resolution graphics, which makes text and images look somewhat unsharp. Dead Cells is an undisputed masterpiece and in my opinion a strong contender for that coveted mobile Game of the Year award. It is ten times more addictive than “Blue Sky”, extremely pure crystal meth that Jesse Pinkman and Walter White used to cook.

Time and time again it amazes you with jaw-dropping locations, refined combat mechanics, a great number of lethal weapons and upgrades to unlock, extremely interesting plot and many other things. Alas, after the second slain boss, the game difficulty ramps up considerably and the combat action gets so intense that I am not sure if I’ll keep on grinding. Nevertheless, Dead Cells will always hold a special place (or should I say “cell”?!) in my heart.

Dead Cells on iPhone XS. I’ve never played this game anywhere else, so I didn’t really know what to expect. Full disclosure, I used the numerous assists that are available such as auto-attacking. I’m not always a champ at these games and prefer the fun of advancing through the story preferable to the struggle of fighting through frustrating difficulties.

So with that in mind, I found the game to be easy to grasp and not so difficult as to be maddening. Enough of a challenge to enjoy advancing. Controls are very easy and responsive on the small iPhone screen. Sound and music are good, though I generally play with sound off. The graphics are crisp and simple. Not down to the level of the current pixelated craze, but still fairly basic.

Dead Cells is very well made and I can see myself spending a lot of time on it. Oh, and did I say one of the swords in this game looks like a lightsaber? Cause it does. A big plus! Worth picking up, and this isn’t even my favourite genre.

This is my favourite game I’ve gotten from an App Army. I’m terrible at it, but it’s still my favourite. The graphics are beautiful pixel art that perfectly portrays the atmosphere.

I was unsure of how a “rogue-like Metroidvania” would work, as I’ve never been the biggest fan of rogue-likes. But I find the mechanic of the map changing every time you die to be very interesting.

It seems to me that if you don’t die, the map doesn’t change. I haven’t been able to get very far yet, so if I’m wrong someone please correct me. But good luck not dying! I don’t think this game is as hard as Hollow Knight but the controls make it more challenging.

The controls are surprisingly responsive. I don’t have much issue moving around. My fingers do sometimes slip off my actions which can be annoying. I look forward to trying it with a Bluetooth controller if there is support. I haven’t tested the auto-hit mode for the controls because I don’t like the sound of it.

I’m getting better at the game. And I’m sure I will be playing this one a long time.

Dead Cells is a rogue-lite action-platformer with stunning graphics and sound design. It’s frustrating (because you sometimes die due to the steep difficulty curve) yet very satisfying never-ending adventure which I got addicted to thanks to the smooth gameplay and depth.

I only had problems with the controls until I got used to them, which wasn’t hard thanks to the detailed control customizations. It has various options ranging from button size and place adjustments to an entire option that makes basic attacks automatic. Plus: you can customize the appearance of the food in the game. 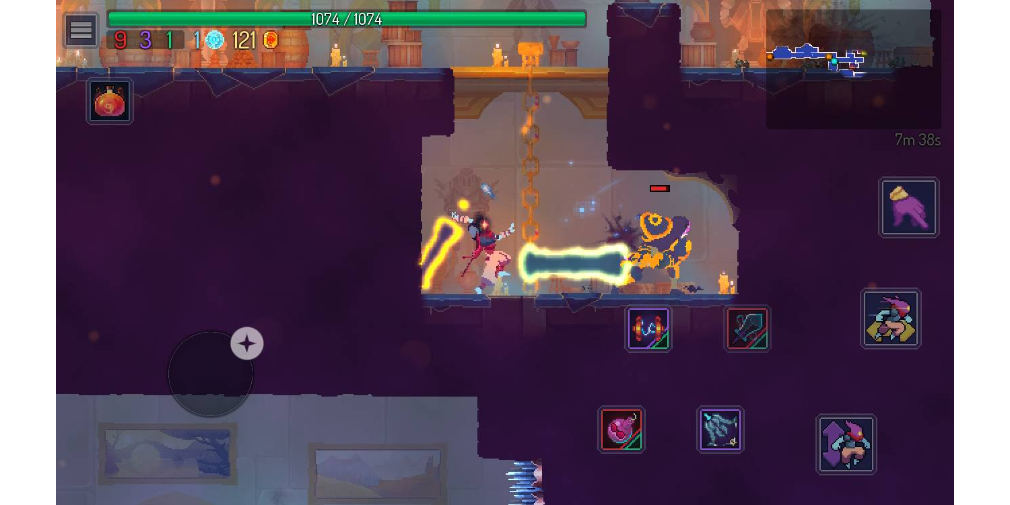 Dead Cells is promoted with the tagline ‘Kill. Die. Learn. Repeat’ which in the best possible way encompasses its entire idea. You slaughter enemies using all sorts of ranged and close combat weaponry. At some point, you die, but for our protagonist death is not the end, he gets a chance to redeem himself time and time again.You learn, which means you do your weapon and character upgrades, you get to know all ins and outs of the gameplay and lastly, you repeat your attempts at getting to the endpoint.

The visuals, sounds, fighting, upgrade system, everything is top-notch and pleases the eye, ear and soul. Every time I perished, I instantly hit the “replay” button for the game is that addictive. The only downside I envision is that further on the gaming sessions will get way longer, and I might get frustrated by the inevitability to repeat the initial efforts.

Dead Cells needs no introduction to true gaming fans. Since its release for all major platforms a year ago, it garnered outstanding reviews. In case of casual gamers like me, if you need to get something out of your system, this game is up to the task.

Fantastic game with a unique idea. The visuals are gorgeous and dynamic. I love the entire gameplay model but I do wish there was a map of some sorts to help me navigate. Having never played the Switch game, I’m unfamiliar with physical controls but the touch control model never bothered or interfered with my game.

So far, I can easily see why this game has been at the centre of so many rave reviews. Will definitely keep playing!

Castle…err I mean Dead Cells is a decent update of an old concept brought to mobile. If you’ve played any old school action platformers there are lots you’ll be familiar with here, in a mostly good way.

The graphics are decent but not outstanding. At times the dark colour palette makes parts of the screen and certain enemies difficult to make out. The music complements the setting well but is nothing you’d remember after turning the game off. The sound effects are actually a bit better, with nice variations for each weapon.

Movement and attacks are easy. Unfortunately, jumps and dodging can be tricky. Expect to repeat the same jump 7 times until game accepts it. This isn’t your average beat-em-up. Many of the weapons you get can be used like traps, and that’s the way to win here. There’s also an upgrade system for weapons and yourself, adding to the reply value.

You are a headless ghost that reanimated a corpse, and is attempting to escape an island prison. Weird, but in a fun way. Dead Cells is a fun and serviceable replacement for action platforming. You won’t be composing a Symphony of the Night for it, but Dead Cells can whip up some fun.

Having put many hours into this on console, I was sceptical about whether this would work at all on a touchscreen.

This is a very fast-paced game where the only solace is a 30-second break between levels where you get to spend your orbs on upgrades and new weapons.

The enemies grow increasingly challenging to a point where, unless you have mastered the roll and correct combination of weapons, you will struggle. But with each time you die, you learn a little more and manage to fight further next time.

The graphics are stunning and complement the game style extremely well. The controls are tricky to get used to, especially as I learnt the physical ones first, but some “first-timers” to the game might pick them up a lot easier.

A must-have if you are looking for something fast-paced!

I dared be excited for Dead Cells on mobile in what seems like a pointed disregard for older 1GB devices (looking at you TEPPEN) and I am overjoyed to announce that if you sport an iPad Air, you will have a silky smooth experience.

The next question was one of the controls, I took advantage of button layout customization to space controls a bit, and the experience is as intuitive as a Metroidvania experience on a touchscreen can get.

Dead Cells needs no introduction from me, it has established dominance in the genre on every platform it ports to. It’s fast, viciously satisfying in every regard. And flawlessly ported, did I mention that battery drainage and device heat on my iPad Air was minimal? Dead Cells is an achievement in game design, and the mobile port is stellar.

Rogue Legacy launched around five weeks ago, and for sharing the genre of roguelike Metroidvania, I considered that either one would scratch the itch. Having played both I can confidently say that they are both incredibly well designed and ported, each immensely difficult in its own way, and different enough to validate their place on every mobile device. 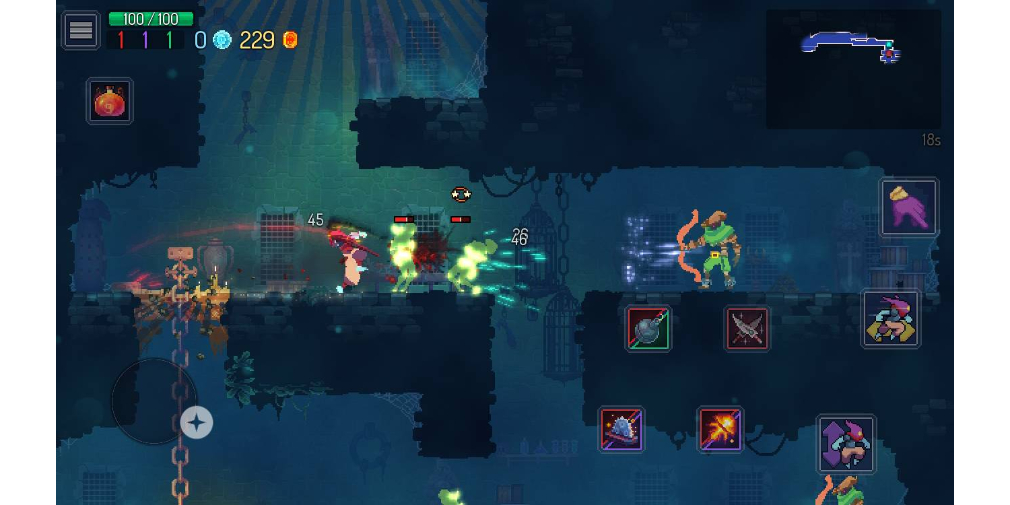 I haven’t played this anywhere but of course, heard good things.

I played it using my MFI controller and my iPhone and works flawlessly, nor noticeable frame drops or bugs so far, and the whole menus are interactive using the controller so that’s nice.

Playing it in a small device as the iPhone 7 is not the ideal scenario, the icons are quite small and you struggle to read them sometimes, so if you have an iPad or a bigger iPhone this should be okay.

The game is quite rewarding, difficult and you have to play it for some time to scratch the surface, is quite hard but if you enjoy those games you’ll find an amazing game in here.

I never played it on any other device so I went in with no real idea of the game.

For me, the controls on my iPad were a bit tricky and I found there were moments where I jumped into an area with enemies and was just standing there because my fingers were touching the wrong spot, moving around was fine but in the heat of battle it kinda sucked. Also and this is just my personal pet peeve but I hated that it didn’t sync up with my iPhone so I could continue playing on the go.

It’s a beautiful game and provides a lot of action and entertainment, having a map is fantastic, it’s maybe the first game that doesn’t really punish you for dying over and over again.

I’d definitely recommend it to others

The App Army is Pocket Gamer’s lovely community of mobile game experts. Each week, we ask them for their thoughts on the latest games and share them.