inbento is a lovely looking game where you play as a mother cat making bento meals for her kitten.

It looked so cute that we decided to serve out some inbento to our App Army. Here’s what they made of it:

I’m hooked. Plain and simple. This is the kind of puzzle game that makes you think but doesn’t stress you out. As a momma cat, you are learning to make bento boxes with various foods. You have to basically match patterns with the different food types (rice, fish, veggies, etc.). The interface is tactile and pretty intuitive. The challenge gradually increases and really makes you think spatially. There are nice relaxing tunes as well.

This is a cute puzzler/spatial acuity game where you rotate and arrange tiles representing different kinds of food in a bento box. The mother and baby cat are cute. The music and sounds are nice. The controls are very simple, with absolutely no problems on my phone. The graphics are sharp and appealing. The challenges start off very simple and the difficulty very gradually builds up. The Devs seemed to want this game to be as soothing as it is challenging, and in my opinion, they succeeded. This is a simple and pleasant brain teaser that I can easily recommend.

This game has a really nice vibe to it, the premise is you are a mother cat and you have to make lunches for your kitten by rotating or moving pieces into the box to match a set style, it starts off straight forward with what you can do then new mechanics are added as you progress. it’s a soothing game and I really like it. Nice graphics and music to it that remind me of a Nintendo(or eshop) game in it’s look.

This is a really well presented chilled puzzler. I have to admit I found it slow to start with a distinct lack of challenge, which was in danger of losing my attention. But about halfway through it starts to come together with a steady build-up of new gameplay mechanics. The controls are simple and the cheery graphics work well. If you want something not too taxing this would be a perfect distraction on any grey cloudy morning. An easy one to recommend.

I love a good puzzle game, and this one doesn’t disappoint. The game starts slow, but ups the challenge as you progress through the levels. The game is challenging, but not too frustrating. Figuring out a tough level after several tries was very satisfying.

I liked how the game adds new play mechanics as you progress through the levels. The different challenges kept me interested in the game and I frequently found myself saying “ok, let’s play just one more level” and then ended up playing additional levels. The graphics and sounds are good and fit the game well and the back story of the mother making lunch boxes is cute.

I am more into fast action/arcade type games, but I love playing puzzle type games in between more hectic games as a way of relaxing and resetting my mind. This game is excellent in that regard. I highly recommend this game to any puzzle fans out there, but the game is also a nice change of pace for any games. Definitely worth a download and play through.

Who knew packing sushi for lunch could be so entertaining? I’m really not big on puzzle games but there’s enough of a challenge to keep everyone happy. It starts off pretty simple and slowly builds up which is great and even the little cut scenes of the kitten and its mom are fun to watch and slide over. A very straightforward game that anyone can enjoy 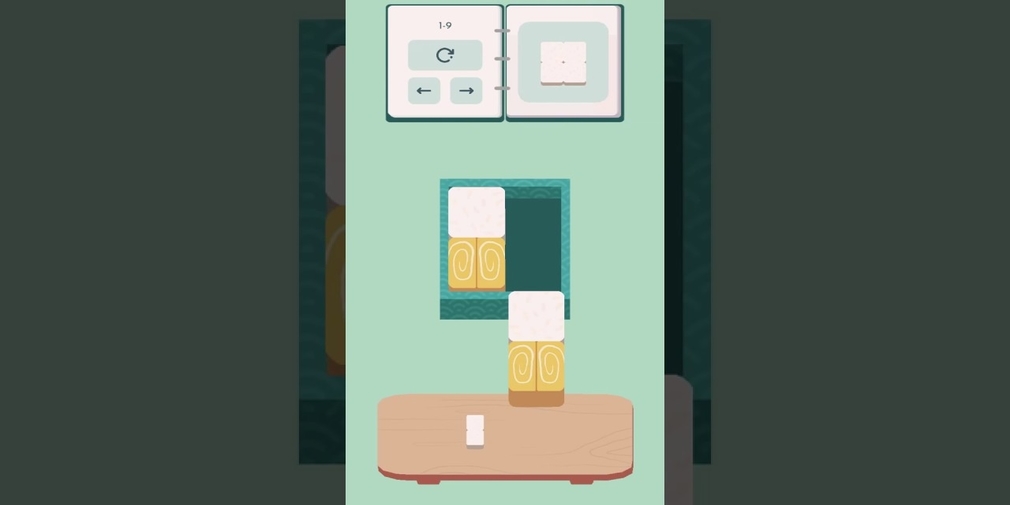 inbento is a minimalistic zen-like puzzler that puts you into the role of a feline mother that with much love and care assembles (pun intended) for her little one yummy lunch boxes. At your disposal, you’ve got colourful Tetris-like elements depicting different types of food and your task is to cunningly piece them together so that your final result completely matches the template shown in the upper right corner.

Currently, the game offers 12 sets of puzzles, each consisting of 9 levels. Yes, this is not much and I estimate about 2-3 hours of playing time. As is the case with other similar games, Inbento regularly introduces new gaming mechanics, so you won’t get easily bored. This is a nice in-between game, that does not require too much out of you and your busy schedule. I’ve already completed 70 puzzles and I intend to deal with the rest as well.

Let me stress it again, this is a simple little puzzle game, so do not expect much out of it. But I am sure that some gamers who are through with Campfire Cooking, might enjoy the flavours of inbento as well.

I had great fun with this game. I have to admit that at the start it was pretty easy and I put it down thinking it wasn’t for me. Then I decided to give it another go and I had been completely wrong. The puzzles went up a gear and there were lots of tricks and combinations to boggle my mind.

The graphics are bright, there are a mother and baby cat which gives a break to the gameplay and the music has a zen quality to it, which doesn’t grind in the background as you try to think through the puzzles. This is definitely a great game for anyone who likes to lose themselves in a good challenge.

I’ve been longing for some quality-made puzzlers and got everything that I wished for with inbento. There is nothing fancy about this nice little title, but at the same time, it is super cute and almost purrfect for that quick gaming session.

You are tasked with assembling sushi sets following a given pattern and though everything starts very easy – the closer you get to the end, the trickier puzzles become. With each new level pack, a new mechanic is introduced, so for me, the gameplay never got repetitive despite its repetitive nature by default. Puzzle-solving is intermingled with the story of a feline family, which is presented in the form of swipeable hand-drawn pages each having its own background noise.

To sum it all up, I’ve played quite a bunch of similar puzzle games in my lifetime and in this regard inbento reminds me to some extent of Strata and Kami games, so if you enjoyed the latter, you’ll certainly fall in love with the former too.

inbento is a puzzle game where, in simplest terms, you must match the picture shown of a completed puzzle, by manipulating the shaped blocks you are provided, into another box. There is the usual increase in difficulty and the slow addition of more complicated patterns and new blocks which can be used to change the arrangement of existing blocks, there are no timers or penalties for making mistakes, just a chilled, straightforward experience.

The game combines this puzzle experience with a super cute cat aesthetic with the Mom cat preparing Japanese bento box meals for her kitten, and the food pieces are used to represent the puzzle blocks, it’s so super cute it may put a few people off. There are nine levels per stage and I initially I sat down and completed the first six stages in hardly any time, there are 12 stages in all and the steady increase in difficulty may get challenging near the end. You get a paw mark per puzzle for completing it without having to retry and there are achievements for doing so.

It’s a good game, how much you get out of it will be down to how good you are at puzzles but I think it’s a great little, highly polished game and definitely worth the asking price. 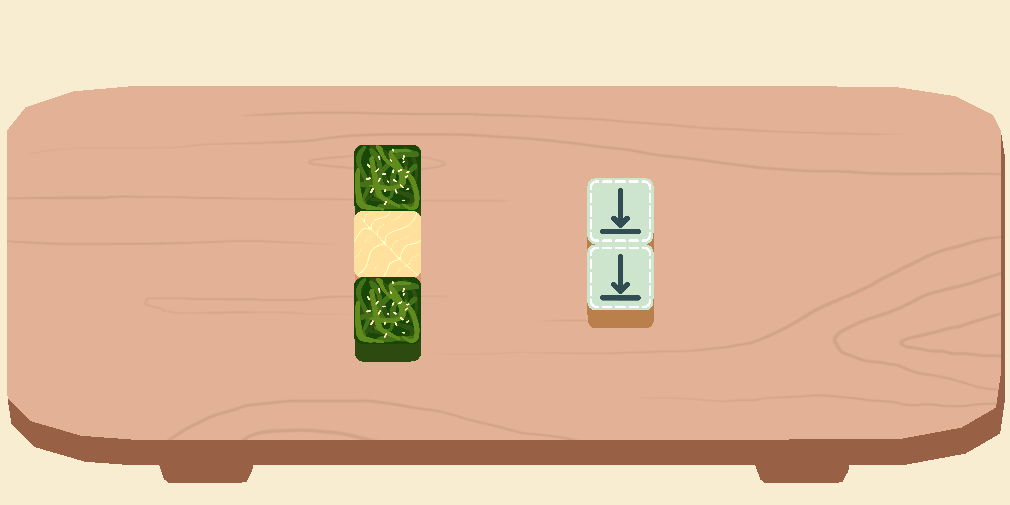 I wasn’t sure what to expect before beginning inbento, but after playing for some time, I have found my new coffee-break game. You have to arrange sushi into different patterns based on a given picture. The game starts very easy but soon ramps up the difficulty with loads of different actions you can perform to each part of the box. I’ve spent a good day or so, going back in every so often when I can, trying to figure out one of the puzzles.

Anyone looking for a challenging puzzle game should probably give this a try.

It is a cute puzzle game with an interesting hook for its gameplay. You are a mother cat making lunch for a kitten. A bit too cutesy for my tastes. But the gameplay is solid, with simple colour matching mechanics that gradually get more complex. Some of the mechanics, such as switching certain blocks, really make you think about the solution. I found it very addictive, going through puzzle after puzzle in rapid succession until I found myself stuck on one.

While I personally don’t care for the cute style, I decided to put it on my wife’s phone and she enjoyed it immensely. We were racing through the puzzles together and getting stuck on the same ones and helping each other. That was the most fun that I had with the game.

While the aesthetics are not my cup of tea, I really enjoyed the gameplay. I definitely would recommend it.

At first, it looks like a simple puzzle game, and indeed the mechanics are rather simple, however, the complexity of each level increases gradually, and rather sooner you end up facing a real challenge. Also, since there is no limited number of tries and no penalties, you can just keep looking for the right answer without any pressure. All in all, a very solid and cute puzzler to pass the time

The App Army is Pocket Gamer’s lovely community of mobile game experts. Each week, we ask them for their thoughts on the latest games and share them.