Pachoink is described by its developer as a cross between a Pachinko machine and Brick Breaker. It’s set to release on 21st February but our very own App Army was given access to the game a tad earlier so we could provide our readers with not one, but several opinions. We’re talking multiple perspectives here folks.

Here’s what they said:

Pachoink is a combination of brick breaker and pachinko. Once you shoot the ball, there is not much else to do. I quickly became bored since all I was doing was shooting ball after ball and watching. Perhaps instead of the passive pachinko, they could have made this more like pinball so you would have something else to do. Stars are based on time and you really have little control over that. Sadly I can not recommend this game, it’s just boring.

I kinda liked this game. It’s a nice time-waster. As mentioned above it’s a pachinko style game with a world map and different levels with different challenges. The only thing that can change is the strength at which you launch the balls. The quicker you complete the level the more stars you earn. It’s got a world map through different areas. It reminds me of Jelly Splash in that regard.

I really didn’t think I’d like this game, but I did. Aside from the music which was probably appropriate but too annoying for me to listen to. The game is a simple variation on Pachinko. And as others have said, there is very little you can do while the little ball is dropping wherever it’s going to drop, with the exception of how much strength you put into the launch and a few in-game switches that can be hit to change the board. But for what it is, it’s a pleasant time-waster and distraction. It’s nothing revolutionary, but it’s enjoyable enough.

Nice little time-waster with a relaxed feel owing to the simple controls and gameplay. I haven’t completed the game yet but at 50% complete have found the game far too easy so far with gold stars being achieved on the first attempt. The game could also benefit from a bit more variety in the level design and look for each area as they all feel very samey. Enjoying my playthrough but will be quickly forgotten.

Bagatelle! This reminded me of the non-electronic games of my youth as this is basically a souped-up version of those sort of drop ball games. Unlike pinball, there are no flippers so your control is limited to how much force you impart to your ball and then it’s out of your hands.

The different layouts as you progress through the levels maintain interest and have multiple balls in play helps you complete each level quickly if achieving the stars is your priority. Not a game I would play for hours, but would certainly boot up from time to time to play when stuck in a queue or commuting.

This game is so satisfying! I particularly like the sound choices. When the ball drops and bounces, it feels anxious and curious to see if it can hit the target. There is some sort of shooting force measurer, so we learn which force levels work. The game is simple. All we do is pull and let go.

I liked the game, it’s like a pinball game with a puzzle, the music and sound effects are very good and enjoyable to hear. it’s a game to relax when you have a tedious place like a bank row, I liked it and you can have fun

My first impression was, first of all, to be surprised by how much the music bothered me and that the graphics were dull and not very attractive. Then the gameplay seemed too simple, then the levels too repetitive… For game sessions of 5 minutes in transport, the game is distracting, but I would not play longer sessions. It is not the adaptation of Pachinko that I prefer, unfortunately.

This game is like a mix between Breakout and a Pachinko machine. A novel concept that is very relaxing and fun. But some of the gameplay mechanics, such as the portals, can be extremely frustrating. Presentation is kind of dull. Nothing to look at but dull colours and smiley faces. That said, my nine years old loves the game.

Immediately Pachoink! appears to be a holdover from late ‘90s flash games. The graphics and gameplay are simplistic and there’s very little in terms of depth. There is some satisfaction to be had in continuously launching pachinko balls into a playfield of breakable blocks, but beyond that, there isn’t much substance. 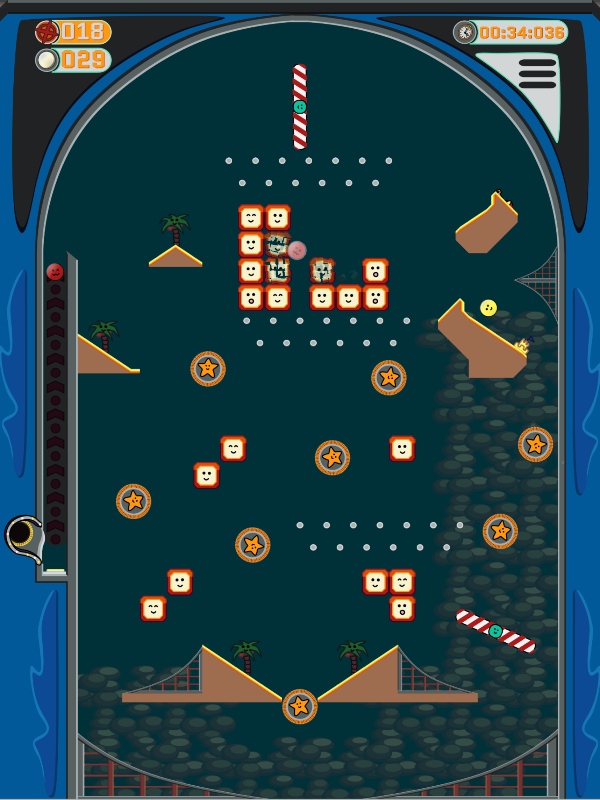 A simple game that you can dip into during a coffee break. The game isn’t challenging as you can send several balls at once which allows you to easily obtain three gold stars. Graphically it looks ok but is quite basic and the sound has a very retro feel. This isn’t a game I’d necessarily buy but good if it were free.

If you’re looking for a game to fill that empty half-hour then this is the perfect game. The challenge level ensures that you don’t get stuck for too long and can progress without too much trouble. As is often the case with many games, I preferred to play with the sound off as the background music and sound effects quickly got monotonous.

After playing a few levels I found that I got a sense of the pressure needed to accurately launch the balls towards the targeting areas and with adept timing to avoid barriers it became very entertaining. On a couple of occasions, I launched several balls together to give an amusing edge to the level. Pinball games have never been a genre I’ve had an interest in, but I found this one enjoyable.

The App Army is Pocket Gamer’s lovely community of mobile game experts. As often as possible, we ask them for their thoughts on the latest games and share them with you.

To join, simply head over to the Facebook Group and request access. We’ll get you in right away, once you’ve answered the questions.