I have no idea who came up with this. Honestly, like I just don’t understand who thought the brutal viscera of Gears of War would be a good fit to mix in with Funko POP! Vinyls to create a new game. Funko has licenses with dozens upon dozens of franchisees, who pushed for Gears of War to be the killer app to combine with these disgusting plastic figures? It truly boggles the mind, even now, well over a year after the initial announcement.

But the game is now finally in our hands, and we’ve all been playing it here at Pocket Gamer, and we have to wonder, how good of a mix was Funko and Gears of War, and is the game that resulted in their combination any good?

Gears POP! is a real-time strategy game when you send out slow-paced units to fight against other slow-paced units in online PVP battles, and the very occasional co-op encounter against a boss NPC. There are two primary lanes, littered with the third-person shooter staple, chest-high walls, and you capture these walls as you move towards your opponent’s base.

If this sounds like a lot of other PVP mobile games, that’s because in many ways, it is. It’s a simple, tried-and-tested formula we’ve seen in dozens of games before. And here, as in many others, it works very well.

You wait to fill up an energy gauge, and you use that energy to summon units, with different units having different quirks. Some will head directly to the enemy base to do damage, while others will wait at each individual wall to capture it on the way. A slow tactic, but one that is incredibly effective in the long run.

To win you simply destroy your enemy’s base, and there are two primary ways to do that. Either split your forces between the two lanes, capturing all the walls on the way and destroying both turrets before heading to the base, or focusing your forces on a single lane to totally overwhelm the enemy with minimal hassle. The latter tactic is the fastest but also carries the most risk with it.

Forming an army which can take down both small, disparate units from multiple directions, and a full assault with a crowd of enemies is key to winning in Gears POP!

Winning PVP matches will earn you chests, of which you can hold four at a time, and will wait for a timer to unlock. Sounds familiar, right? Well, luckily the chest timers all tick away at the same time, so you don’t have to wait for one at a time, like in many games.

The same old song and dance 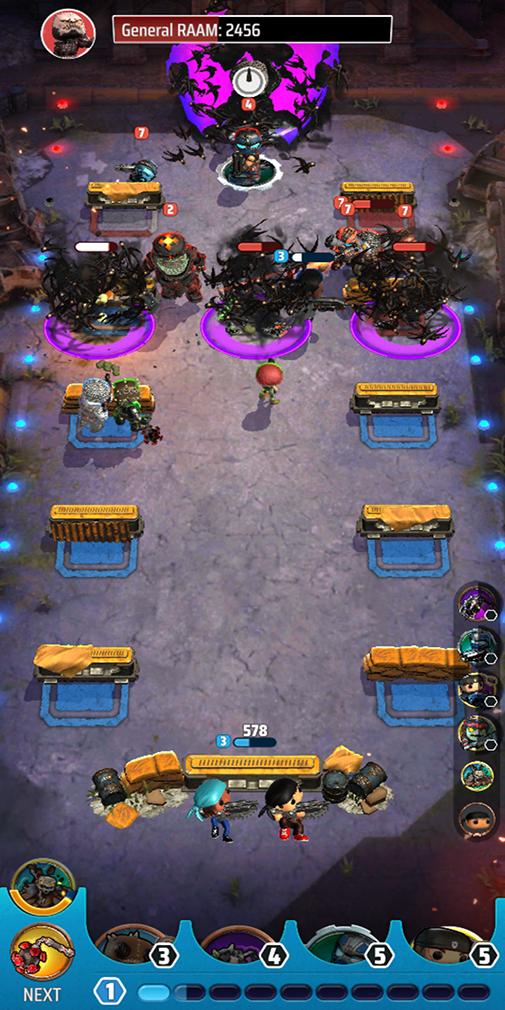 The gameplay loop from there, you can probably predict. Battle, earn chests, use pins to upgrade characters, upgrade give your experience, rinse and repeat until you get stronger and stronger. But that’s not a bad loop, because battling online really is fun, and you can rise through the ranks fairly quickly.

There’s a co-op mode too, which allows you to team up with someone from your team, and then you can take on a multi-wave gauntlet against a powerful NPC foe. Assuming your team partner doesn’t leave or disconnect, this is a great mode to play, although it takes much longer than traditional battles.

So that leaves us with one, important, questions… Why Funko? And honestly, I just don’t know. I think it’s sensible for Gears of War to adopt a more simplistic, charming art style for a mobile game, where it will be run on much less powerful hardware, and grizzled depictions of Marcus Fenix won’t hold up so well, but why Funko, specifically? I just have no idea.

The characters certainly don’t look as charming as intended, but then again, I am certainly not the kind of person who would buy POP! Vinyls anyway. It feels like a pretty shameless way or marketing the game at Funko fans, many of whom are children, of course.

But the game itself is good, and despite the, ew, Funko bits, it can hold your attention for hours at a time. Not to mention, there are Xbox Live Achievements here too, if that’s the sort of thing you can see yourself caring about.