Mobile games have become the perfect place for bitesize MOBA games. Whether it’s a card game, real-time strategy, or pretty much anything else, the MOBA trend is here to stay on mobile, because that frankly repetitive gameplay loop is actually pretty appetising when in such a portable form factor.

This is exactly the niche that Heroic – Magic Duel fits in to. As a game, it is frankly devoid of an original identity – not a shock for the mobile marketplace – but despite that, it’s hard to deny that it plays a decent game of triple-lane card battling.

You have three lanes, cards to summon monsters, and a mana bar which slowly refills over time. Yes, this is another real-time card strategy, similar to the recent Teppen, but with more emphasis on overwhelming force and counter-strategies.

You place a monster in a lane, and once they reach the opponent’s side of the screen, they do damage to their main HP. If enemies are in the way, they will need to be dealt with first. The basic rules are honestly pretty simple.

You’ll find depth in monster counter picks. Certain cards can summon multiple monsters, which can seriously slow down the powerful, single-attack creatures. Conversely, multiple monsters with low HP won’t pose a threat to a monster like the Reaper, which will take out the whole gang in a single swipe.

Pair up a strong monster with a healer, and you’ll be able to dominate a row, up until your enemy uses their hero skills to even the odds.

Ah, yes, you will play as a hero in each match, and each has a few skills, a bit like Hearthstone. Here they’re pretty basic, like damage to a section of the field, a push away from your health, or a stun attack to slow enemies down. Using this in conjunction with smart monster play can guarantee your win.

Here you’ll find similar rules to gameplay and deck building that you’d find anywhere else. You can’t load your deck with too many high-mana monsters, lest you’ll be stuck when summoning. You need stronger creatures too, for a weak party of many can still be chewed through.

Early on this feels like a very satisfying gameplay loop, but quickly becomes tiresome, because you won’t be earning new units and monsters fast enough. This is a mobile game, and they love to make you wait.

There’s no energy system in this game, meaning you can play all day, but you’ll quickly max out your space for chests, and unless you open those, you won’t get be upgrading units or getting stronger. Most chests take three hours or more, and while it’s a nice surprise to find when you log back in, the wait times feel brutal.

There are victory chests for ten wins, but later in the game ten wins are hard to come by. The fact is, if you spend money in this game, you’re likely to have better units, upgraded further, and more capable in battle. A good strategy can always overcome these trials, but strength is strength, and is tough to fight against. 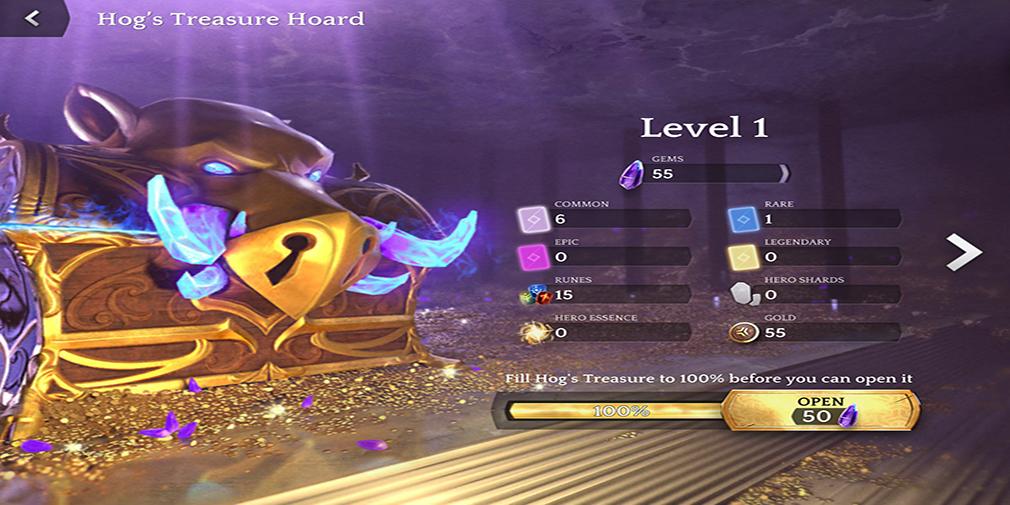 Not only that, but the game often feels like luck is involved too much. Which cards you draw is an obvious example of RNG, but what skills your opponent will use, what cards they have in their deck, how they will counter yours, all of these are mysteries until you get started, and I quickly began to notice familiar, powerful, units popping up in enemy decks over and over, but I didn’t have these cards. A punishment for not logging in every three hours to open chests, I suppose.

Too much of this game revolves around opening chests and upgrading your skills and creatures. The runes you need to level up your monster deck are frustrating too, for each type of monster requires a unique rune. Runes are hard enough to come by, but once you level up a monster a few times, the amount of runes required for each improvement gets steeper.

There’s far more to delve in to. More heroes, more skills, ways to level up individual skills and effects, but it’s what you’ve seen dozens of times before in other mobile games. None of this is bad or implemented badly, it’s just rote. Boring.

Which is a shame, because the game plays really well. If this game had a more distinctive art style, or more unique characters, or heck, the kind of cast Capcom can command, then I’d be way more interested. But as it stands, I’m done with Heroic Magic Duel. It just doesn’t offer anything unique, and that’s a crying shame because it actually plays a good game of cards.