Upon turning on Sky: Children of the Light for the first time, things felt familiar. I’ve played Flow, Flower, and Journey, all several times, and unlike the distinct evolutions in presentation and execution that we’d seen before, Sky feels familiar.

In Flow, we saw the beginnings of life, and how it can slowly ascend (or descend) from nothing to something more powerful than where it began. Flower showed us a similar concept, but with life harboring life, and spreading it across the land.

Then finally, with Journey, we saw the end. A seemingly endless march towards an imposing mountain and no salvation found at any point, only a culmination of where life leads, which is not always as exciting as where it begins.

With thatgamecompany’s three previous games, they have chronicled life itself, from a basic, molecular state, to the conclusion of a once-great society. So it’s only natural that Sky: Children of the Light takes that premise and goes even further with it.

To be clear, I haven’t seen everything that Sky has to offer, but I want to. With a gorgeous style of presentation and fascinating world, I want to see everything and explore every inch. And that’s a darn good sign, but as for the developer’s intentions or how the game concludes, I can’t possibly comment. Only speculate.

The intro to Sky feels like Journey. We have a third-person game, a character with a flowing cape, and the ability to beep and glide around our surroundings. Yep, that’s definitely a lot like Journey, and it the way the game feels doesn’t give you that impression, then the way it looks will, with the intro section being set on a vast section of sand, with small monument with flowing ribbons tied to them guiding you forward.

But quickly, things change. Although it plays similarly to Journey, and even has some aesthetic similarities, it quickly became obvious to me that this wasn’t trying to evoke the impression of a sequel to Journey, but instead a successor to that theme of life itself.

Journey wraps up with a climactic and memorable flight through the heavens. At the end of life, we find salvation, or so Journey believes. Here we find our friends, our allies, and peace.

And I believe that’s where Sky begins. After all, you begin in the Sky, with the flight capabilities you built up over the course of Journey with you from the beginning. And this is neither a solemn pilgrimage with a single friend nor a stroll through a forgotten land. It’s a trip through the tales of life itself.

While Journey had multiplayer capabilities, allowing you to team up with a single person online to guide you through, Sky has it in spades, with similar-looking child characters wandering around all over the place, allowing you to contact and communicate with them. 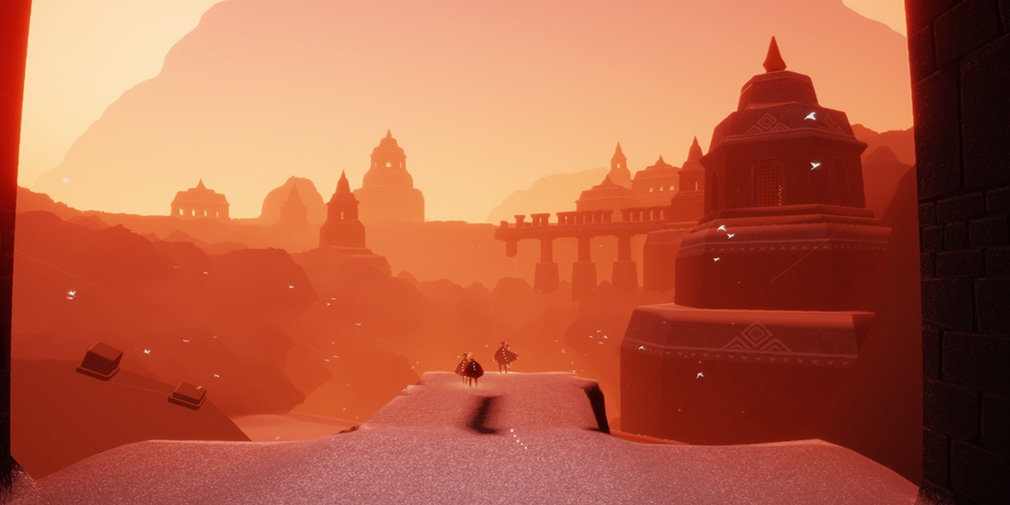 Some puzzles I’ve seen even require attempting to communicate with and organize with other players online. As of right now, that seems difficult honestly, but I believe this doubling-down on multiplayer features could lead to some incredible and memorable gaming moments, just as Journey had done years ago.

While exploring Sky you won’t just come across other players, but spirits too. You will follow spirits, and they will show you their last moments, their last wishes, their regrets, and then give you the strength to continue onward, along with the ability to understand their emotions.

We aren’t spreading life, or telling the tale of our lives, we are instead remembering those who are gone. Comforting spirits that have long since lost their chance, and bringing them the understanding they might have never experienced otherwise. It’s haunting, quiet, and evocative all at once.

I believe Sky is showing us life’s end, by telling us about the different experiences we all have in life. Sky: Children of the Light is nothing like any game I’ve played before, but it is absolutely essential to play.