Senran Kagura is the series that just won’t quit. Having somehow transformed from a simple 3D brawler into a genre-spanning franchise, it’s hard to work out where the series plans to go next.

But Peach Ball makes some sense at least – it gives you the opportunity to smack large-chested women with balls, and opens up the door for endless ball jokes to boot.

Sadly, the game itself is incredibly repetitive and you’ll have seen basically everything the game has to offer in its first hour, meaning only hardcore pinball fanatics and perverts need apply.

Senran Kagura Peach Ball explains away its improbable scenario with a story about magic potions turning people into animals, and giant pinball machines that can turn them back into humans.

Each of the five story paths follows your chosen girl helping all the other girls turn back into humans, with small chunks of dialogue between each game to fit in some bad jokes and give you some time to ogle the ladies within.

Honestly, at this point, Senran Kagura’s sexual content feels a bit old hat. It’s like it’s been designed by a teenager who’s flicked through some old copies of FHM and Cosmo – they know what sex is, but they have no idea what it actually looks like.

Get through that and you’ll find yourself in the game proper, staring down a huge pinball table with that stage’s girl placed at the top of the screen, ready to get whacked with your balls.

You’ll be playing on one of two tables – Peach Land, which is an all-singing, all-dancing theme park, or Spooky Shinobi Park, which focuses on Japanese folklore.

The former is quite clearly the better course, with a bunch of unique events to hit if you’re accurate enough, and a third flipper tucked away to give you more routes to explore if you can get up there.

Your goal isn’t just to score points – instead, you’ll need to complete certain Peach Missions to build up a meter, which unlocks special Sexy Missions when filled.

These Sexy Missions take you to a seperate arena with its own gimmick, and lets you both strip the girl of some of their clothing and rack up some huge points with little effort.

Complete two Sexy Missions and fill the bar fully and you’ll reach the Super Sexy Mission, which rounds off the match with you firing balls at the girl’s boobs or butt.

So yeah, if you get a bit uncomfortable around sexual content, you should definitely give this a miss. There’s T&A wherever you turn, and it’s not conducive to simply playing a nice, gentle game of pinball.

Not that the pinball is much good to play either. With only two tables, Peach Ball gets super repetitive super quickly, and you’ll learn all the ins and outs of the tables within an hour or so. 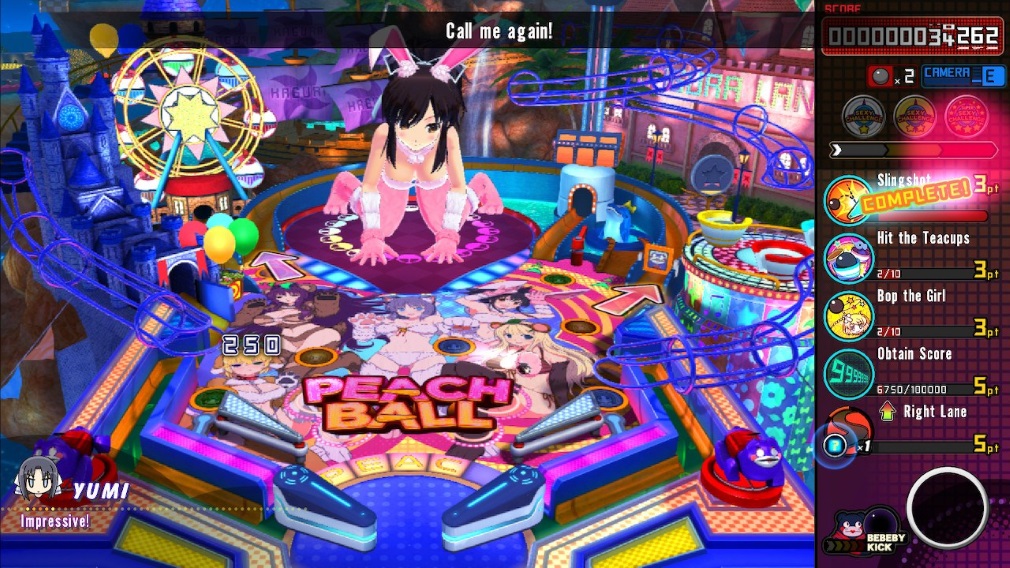 The physics feel a bit off, collision detection can be a bit wild with the flippers, and there’s so much going on at once – missions, scores, girls moaning in orgasmic pleasure – that you can barely keep track of where the damn ball is.

The story is limp, and once you’ve cleared all four hours of it, your reward is a group nude and a boot to the main menu. Unless you’re up for going into freeplay for the rest of your time, you’re done here.

There’s also Intimacy Mode, but honestly, the less said about that, the better. It’s available in Senran Kagura Reflexions as well, and that’s infinitely cheaper if all you want to do is grope digital women.

Overall, Senran Kagura Peach Ball feels like a budget game with a huge price tag. It’s lacking in story, fun gameplay, and even a basic reason to return for more.

If you like racking up high scores and staring at comically large breasts, then by all means, pick it up. But unless you plan on getting heavily invested in the pinball, there’s not enough here to make this worth the asking price.